The Common kestrel (Falco tinnunculus) is a smaller bird of prey, measuring 31-37 cm from the tip of its tail to the tip of its bill, and having a wingspan of 68-78 cm. It has long and narrow wings. It is often seen hovering in the air, when it stretches its long tail towards the ground and spreads it out widely.

Its rusty brown back is sprinkled with black spots, which also decorate its light brown belly. Under its eyes it has a dark-coloured band. The tips of the flight feathers are black, as are the sharp claws on its yellow fingers.

The female has a dark brown upper tail stripe, while in the male the upper tail is blue-grey and having no patterns. Both sexes have a black band on the margin of the tail. The head of the male is also grey, while the head of the female is brown with longitudinal stripes.

The Common kestrel is specialising in hunting ground animals, small mammals and insects, but also birds. It mostly hovers in the air and grasps at voles, which are its favourite food. It preys also on other rodents, such as mice.

It prefers open landscapes with intermingling meadows and fields. It also can be seen nesting and hunting in cities. The breeding season lasts from March to June. It is present in Slovenia throughout the year.

In the picture below, you can see the Common Kestrel male sitting on a vine pole, observing the surroundings to detect some prey. Shot was taken at 40m distance. 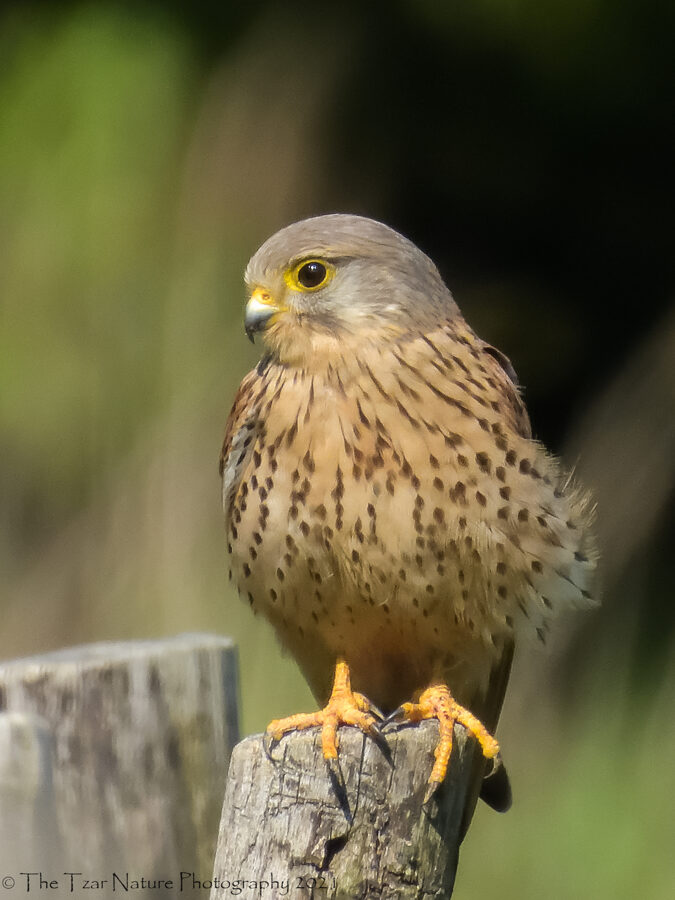